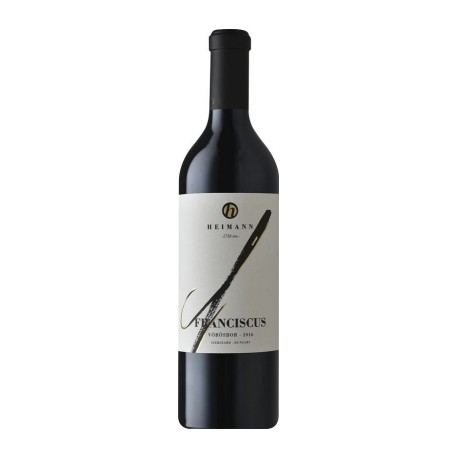 Notify me when available

“We blended the Porkoláb Valley’s Cabernet Franc with the Batti kereszt’s heart-warming Sagrantino crop. The result is a uniquely-flavoured wine with pronounced tannins that is still fruity and has a good ageing potential.” – Zoltán Heimann.

It was selected from two terroirs and two varieties, from low-yield vines, then fermented in open vats. The Cabernet Franc was aged in Hungarian and French coopers’ five-hectolitre barrels, while the other half of the blend, the Sagrantino, was aged in large ászok barrels. The Franciscus is being put on the shelves now, after two years of barrel ageing and another year and a half of bottle ageing.

Strawberry, raspberry and lovage on the nose, later the black berries and some leathery character will be dominant. Full bodied, with round but lively acidity, ripe fruitiness on the palate. Exciting wine, long and very drinkable with nice ageing potential.